Varnish is an increasingly prevalent issue for operators of rotating equipment. In this article, we answer fundamental questions on varnish, such as its causes and effects. Also, we discuss methods for varnish detection. 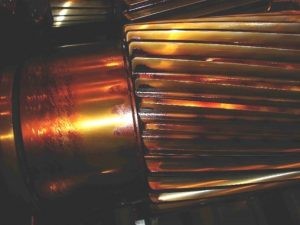 Varnish occurs when a lubricant degrades and produces by-products, which accumulate in the lube system. These degradation by-products are dissolved in the lubricant until it becomes saturated. Once the lubricant is saturated, these by-products can agglomerate and then adhere on metal surfaces to form varnish. Varnish formation is dependent on factors such as temperature, pressure, flow properties, fluid solvency, and base oil chemistry.

The three most common causes of varnish are:

These degradation processes are accelerated by:

The processes that lead to varnish formation.

Why is varnish a problem?

Varnish can impact equipment operation in many ways:

As mentioned before, base fluid chemistry has a significant impact on the propensity of a fluid to form varnish. Certain Group V (synthetic) formulations utilize glycols or esters for the base fluid, which can have radically different varnish-forming properties than traditional mineral oils. Some of these base oil formulations may even claim to be varnish-free. However, it is important to note that varnish formation is a complex process, with interplays between temperature, pressure, moisture content, flow properties, and many other parameters. We would recommend that you do not take it for granted that your oil cannot varnish!

How to detect varnish proactively?

MRT Laboratories has the capability to perform the above tests, and much more. If you'd like to learn more about Advanced Testing, please check out this link.

How often to test for varnish?

Testing should be done within 1 month after varnish mitigation to validate a successful removal.

Typical testing intervals are every 3 to 6 months. This should be determined by the severity of the system after the first round of testing.